The Paperless Night Before Christmas

‘Twas the night before Christmas, and in an office so dim
Mr. Smith was still working. There was no one but him.

He’d sent everyone home but there was work to be done
Before he could celebrate and have yuletide fun.

Endless stacks of papers awaited his eye
And the hours were waning. “Blast!” he did cry.

“I’ll never get home before the kids go to bed
With those visions of sugar plums dancing in their heads.

“I’ll be stuck here throughout the whole night
With visions of paperwork giving me frights.

“Every paper here must be filed away
While some need my signature and some bills must be paid.

“I never dreamed that paper could ruin Christmas Eve!”
He dropped his head to his desk, wiped his tears on his sleeve.

When up on the roof there arose such a clatter
Smith lifted his head, wondering what was the matter.

He stepped out of his office and peered all around,
Searching for the source of that strange jingling sound.

He stepped to the front doors and peered through the glass
Then jumped back again with a loud, startled gasp.

For there, at the window, smiling as he peered in
Was a little old man with a white beard on his chin.

He wore a red suit and a red cap on his head.
He tapped again on the window and smilingly said,

“May I come in? It’s quite cold out here.
And I believe I have something to bring you good cheer.”

Smith paused for a moment then opened the door.
In stepped the old man, dropping snow to the floor.

Smith eyed the strange man and his cherry-red nose,
Taking in his bright eyes and his strange, fur-lined clothes.

“Is this a joke?” Smith asked after a pause.
“Why are you here dressed like Santa Clause?”

The man let out a laugh that was cheerful and warm
As he gave Smith a playful slug on the arm.

“You should be at home with your children and wife,
So I’ve brought you a gift that will change your life.

“I use it myself to make all my lists
And checking them twice can be done in a jiff.

“I thought I’d share it with you to help you handle those files.
Here, let me show you,” he said with a smile.

He strode to Smith’s office and turned on the PC,
Then something called eFileCabinet appeared on the screen.

Then Santa did show him a most magical tool
With OCR and workflows and doc retention rules.

“Now watch this,” Santa said, and touched his red nose.
Then all of the papers on Smith’s desk arose.

With a few simple clicks and a wink of his eye
Santa filed the papers on the cloud drive.

Smith stared in wonder at the organized files,
And at his clean desk. Then he said with a smile,

“I never dreamed it could be done so quick!
You saved my Christmas! Thank you, St. Nick!”

“Now, I must be off. I have gifts to deliver,
And I must get to Norway before that big blizzard.

“You go on home, Smith, there’s no more work here.
Enjoy Christmas Eve, and all that Christmas cheer.”

With that, Santa was gone, and Smith stared in awe
At his paperless desk and all the work that was gone.

He heard a prancing, a jingling, and went to the window to see
Santa’s reindeer and sleigh flying off through the breeze.

And he heard Santa exclaim as he flew through the sky,
“Merry Christmas to all, and to paper, goodbye! 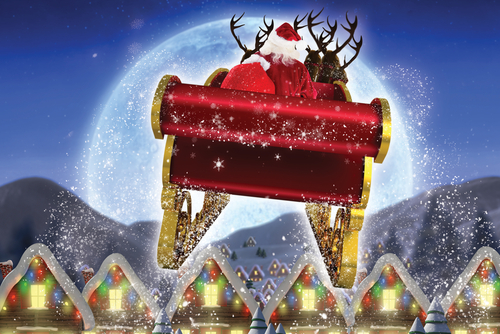